Her flat is burgled; her brother is missing; it’s the last day of term: the thin ice of a part-time teacher’s life is about to crack as a hot London summer begins… 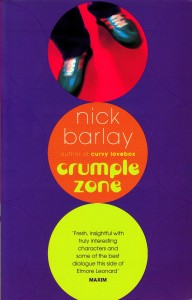 ‘A writer who is not only in command of his technique but seems to be have his finger on the city’s pulse.’ Nick Lezard, Guardian

STANKY
killer stink in the house

Stanky have the whole place tagged. STANKY: BIG, it says on the Bevington Road public convenience. STANKY: FLYING 4, it says on the window of Ootie’s Late Nite Store. STANKY: MASSIVE, it says in skull logo green on the firedoors of Trellick Tower, a concrete slab that looms over Golborne Road like a giant gravestone. And if you look up to the thirtieth floor of Trellick near where the walkway from the main block joins the stairwell, you’ll see STANKY: CHONGA LOCO. My guess is as good as anyone’s what that means…

‘Nick Barlay is a fine chronicler of London’s grittier sub-cultures.’

See the reviews page for more…