Curvy Lovebox, my first novel, was based on people I grew up with, and some that I even grew older with. It was rejected many times by mainstream publishers until I sent it to the X Press. This small, independent, Black publishing house, run by Dotun Adebayo and Steve Pope, loved it, and I became the first white writer on their list. The book became a cult classic, drawing praise for the poetry of its dialogue and its narrative voice. It also drew criticism from people who thought it just wasn’t proper English…

‘I don’t know anyone who speaks like this.’ The Times

Tax is running for his life. 24 hours to stay alive. 24 hours of pain and madness in the underbelly of the big smoke and all because of a wedding, Kilburn, and a girl named Riz. 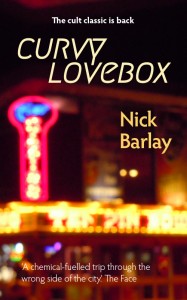 The music’s still pumpin’ out the PA as DJ Loopi DexDex makes his last stand. The place empties slowly but my E’s rushin’. It’s givin’ me a hard on that I’m tryina hide by stuffin’ my fists in my pocket. She’s standin’ with this friend who’s like a seventies disco chick with more platform than Waterloo. They’re both lookin’ a bit pasty in the flashin’ silver purple light. It’s now or never so I go over an sor’a wedge in between her an’ her friend. They ain’t dancin’ or nothin’. I stick my mouth up close to ear.

– Don’tcha like the music then?
– Nah it’s all that jazzy funky shit. No fuckin’ rave music, she says. Band was wicked though.
– Yeah I know’m. They’re friends o’ mine.

We look at each other. She’s alright. Should be in uniform. Small an’ glittery with no horns on her head. An’ she don’t look sick with me either. Over the other side the warehouse Ezra an’ Deezee an’ Zeb an’ the rest o’ their grunge metal band Frontloada are packin’ up. I say to her to wait a second an’ go over to Ez. I have to sift through the laggers who just float about til there ain’t nothin’ left to float about for. Some victim’s getting’ stretchered with a crocodile of dancers formin’ behind. Another’s getting’ mouth to mouth on the stage with steam an’ summer heat hangin’ above like a poison cloud…

‘Nick Barlay’s first novel is a cracker. The action bristles with a laid back wit that is hard to resist.’

See the reviews page for more…